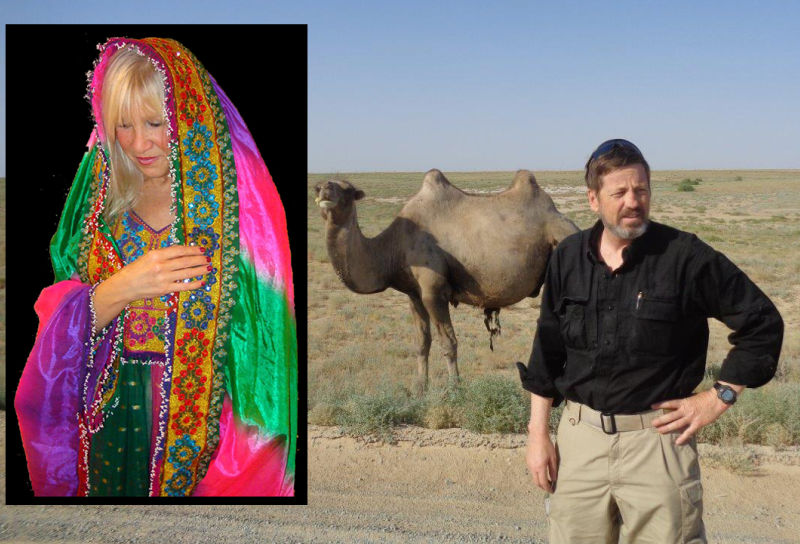 Silk Road – A Time Gone By

Looking down from a helicopter over the landscape of Afghanistan, seeing the abandoned ancient ruins, I wondered about this desolate and remote area of the world and suddenly pictured “The Silk Road”.  Because of the Silk Road, Afghanistan was once a very prosperous area.  For over 2000 years traders traveled through these Afghanistan mountain passes allowing passage across Asia connecting China, India and Europe.

Because of its vital location, Afghanistan sits at the cross road of Central Asia, at the meeting point of ancient trade routes-known as the “Silk Road”.  Afghanistan was the center or hub of a wheel with the spokes being routes extending outward to the west, east, north and south to all parts of Asia.

Merchants on the silk road transported goods traveling in large groups on camels and horses or by foot and traded at bazaars along the way. Chinese silk was highly appreciated in Europe as the colorful silk fabric dazzled the eyes of the people which the rich and powerful paid huge sums of gold to obtain it. They also traded porcelain, spices, tea, ivory, cotton, wool, precious metals, and ideas.

To transport goods, they had to go through Afghanistan, and thus Afghan cities, strategically placed along these trade routes, were able to benefit as places of mercantile exchange. Once the routes ceased to be used, these cities fell into the same fate as the western gold mine towns in America that once the gold ran out, they became ghost towns and like the pony express in America to the telegraph, the Silk Road overland routes became obsolete because of the increase of naval shipping. Transporting goods were much more easily shipped around the world by sea than over land. As luxury goods began to be transported by sea, the overland trade routes declined and the kingdoms in Afghanistan lost one of the best sources of their revenue.

What I saw below from the helicopter was once a paradise and now a barren desert with scattered ruins from the past.

My hope is that my book opens eyes to the reality in Afghanistan.