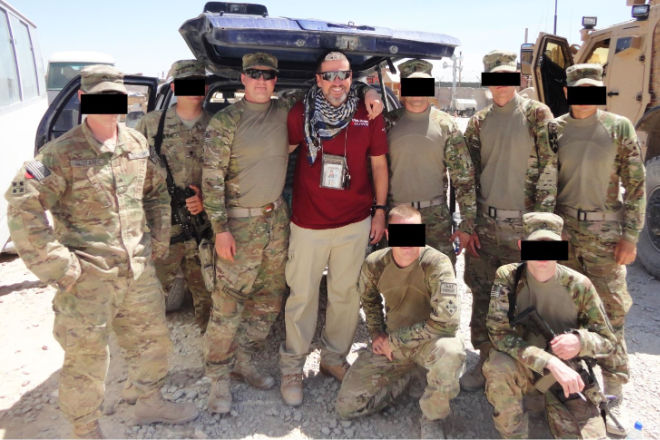 What You Might Not Have Been Told About Being Deployed

What does it mean to be deployed in the military or deployed as a civilian contractor?

By definition, to be deployed is to move into position for military action. Deployment refers to assigning people to serve in various locations. They are like pieces on a chess board that government officials move around. The definitions do not include any of the whirlwind emotions of being deployed, whether military or civilian. One of my most asked questions is what was it like to be deployed to a war zone? I can only answer as a civilian who has been deployed over and over again for 4 ½ years to war zone.

When I talked with my military sons about being deployed, I could hear emotions go into overdrive or lack of emotions depending on where they were deployed and what their family status was at the time resulting in something different to each person. For example, a person like myself with all three sons grown and out of the house and a supportive wife is a completely different dynamic than a person with a husband or wife left behind with young children at home. The stress on the family and marriage can be incredibly overwhelming on both sides. Soldiers and their families feel as though their worlds have been disrupted and turned upside-down.

One of the first things I learned on being deployed to a “war zone” was trying to keep yourself alive! Callous and shocking, that is the real world. And in some ways it was easier than dealing with the issues back home in the states. The Military requires soldiers to have a battle buddy to help them stay in the right frame of mind as everyone at one point will be hit with all phases of feelings and emotions. A shitty/bad day is a good day because everyone is having a shitty/bad day, thus, enjoy the suck! Not on a mission or nothing to do? Then go to the gym, even two or three times a day. Or go snake hunting in an abandoned building. I enjoyed the soldiers’ ingenious ways to keep themselves busy and keep their heads up and living like that day might be their last. It is actually freeing to feel that way. For me being deployed became a mind game. I jokingly asked my fellow deployees, “do you know what the difference is between a prison and a military base in a war zone?” A prison has fences and walls to keep the bad people in with the good people out. Military bases (in a war zone) the fence and walls are to keep the bad people out and the good people in. But in both, those inside the wire have free meals, gyms and a restricted way of life. HAHA Making the Best of a Bad Situation

On deployment you have to be your own advocate. You have to be creative, hunt people down, don’t take “no” for an answer. Each problem has its unique set of issues requiring “outside the box solutions.” I learned you always had to make the best of a bad situation and you can’t assume anything on deployments. I had to figure out how to travel to each job site and began to wonder why does everything have to be so hard and so difficult? You don’t just jump into your car or truck and drive there. There has to be a mission plan, steps taken to implement the plan along with a great amount of intel on enemy activity and how to reduce the risk as much as possible. I even had to travel to another base, in a military convoy, just to get a haircut and mail letters.

Everything will be twice as hard, whether it is running out of tooth paste, getting a haircut, or anything we take for granted in America. We had to constantly be on alert status, being aware of your environment and realizing there are people looking to kill you for no reason other than you are American. Even when out on a walking patrol, is that kid throwing a rock or grenade at me? One time when kids were throwing rocks at us and hit one of my US Army guardian soldiers (those who protected me) above his eye, he had to get a couple stitches.

There’s No Overnight Mail in a War Zone

Many people back home have no idea of what it is like to be deployed. For example, I know of a person getting a home loan and the mortgage people back in the States just couldn’t seem to get it in their mind that things are different in a war zone. No matter how many times the lender was told there is no such thing as overnight mail service from a war zone, the lender just couldn’t understand why the mail would not arrive overnight.

Deployments are undoubtedly one of the hardest periods of one’s life. For the military soldiers coming home after a deployment the thoughts go through your head when will be my next deployment? For the civilian contractor you start looking for a new contract/job within the last couple months of the one you are on that is ending. In both cases you are thinking to yourself how many days until I get to go home. It seems you just get home and finally feel a sense of normalcy with family and friends when it is time to deploy all over again….that is the ugly beast of being deployed!

After a tour in a war zone, coming back to the states can feel like being in prison. Too many people in the stores, too many cars on the road, too many strangers, too many rules, no more battle buddy and no feelings of “I might not be here tomorrow.” It can cause many to prefer to stay deployed.

One of the best things that happened to me after I got home was a Viet Nam veteran friend of mine invited me to one meeting of his fellow Viet Nam vets. Us civilian contractors have never had battle buddies or a support system when we come home. I was surprised they accepted me into their circle because I was a civilian contractor, not prior military. I felt a bit of relief knowing that there were others with the same experiences and feelings.

Most Americans, including government workers who have never been deployed, will never understand the suck. There are no words for what you have and are going through. I hope I can shed some light on the world of deployments to those who haven’t been.

I personally thank the deployed for all you have and are doing. As nuts as it sounds I miss that world and wish I was back. At times I feel like the character in the book “Lost Horizon” by James Hilton, that once the main character left the world of Shangri-La, like being deployed, he was never able to find his way back.