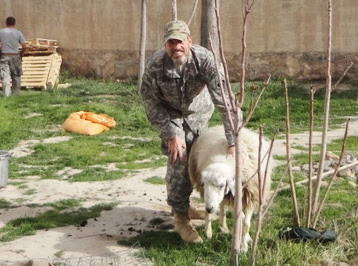 War is Business and Business is Good

WHAT ARE ALL THESE COUNTRIES DOING HERE?

When I first arrived at Bagram Military base, in Afghanistan, I was shocked to see all the different countries there. At home in America, I saw news reports of a few countries helping America in the Afghan war, but this was like the whole world has come to the Afghan War. My first thought was why are all these countries here? I wondered who is in charge and how do all these foreign countries work together?

I later learned that there are NATO Troops and Coalition troops. My curiosity got the better of me, so I googled and learned there are over 50 countries involved in the Afghan war one way or another. Over the next 4 years besides the United States and Afghanistan, the countries I personally had interaction with included, Albania, Armenia, Australia, Bosnia, Britain, Denmark, Germany, Nepal, Ireland, Italy, Lithuania, Mongolia, New Zealand, Pakistan, Kuwait, Romania, Spain, Jordan and Turkey. I never would have guessed this would happen. The next thing I was soon to be educated about was all the different types of people war zones attract being introduced to the most diverse number of people I have ever met. Each with their own addenda, some looking to help, some looking to make money, some looking to kill people to promote a particular religion or political bias. When I came back to America and was asked “what do you do?”, I’d refer to myself as a civilian contractor in Afghanistan. I was shocked when a person said “oh you’re a mercenary.” I never thought of myself as a mercenary since I didn’t carry a gun. But maybe I am?

The war attracts the best and worst the world has to offer. It is like a Hollywood movie in many ways with story after story that you just can’t make up. I would look around and seeing unscrupulous, cagey characters with disbelief and be amazed at all the villains, crooks, killers, cut throats, murders, swindlers, terrorists and at the same time I see the good Samaritans such as doctors, relief workers, educators, construction workers trying to build a better Afghanistan. Those that thrived in the lawlessness wanting Afghanistan to remain as it is for their own selfish reasons and those that are willing to risk their lives and limbs to change Afghanistan to a safer and better place to live. All living and working in the same environment. It was like being in the last frontier, a combination of the lawless west and the War Lords of the world.

I’d look around and think what a bunch of losers and then I would look into the mirror and wonder why am I included in this group. I would often feel like I was in a movie like the Raiders of the lost Ark, with villains and hero’s but unlike the movies it never ended and the death was up front and real. And good didn’t always triumph over evil. One group of people I worked with on a remote base was the civilian UAV (Unmanned Aerial Vehicles – Drone Operators). I was building them a runway for their drones. The Operators had long hair and hippy looking. They were riding their skate boards on the runways so I asked them if I could take a couple rides. They were shocked to see Mr. Rich, this 60 year old man ride a skate board. We all laughed as I told them I have been riding skate boards for over 50 years, in fact we had to make our own boards from roller skates. I asked them what their educational requirements were to fly drones as they laughed and told me it was being good at video games!

On another base I stayed up late into the evening talking about our religions with an American who was retired Navy, a Muslim and a guy from Cambodia, a Buddhist. That was a lot of fun and interesting. They were both surprised that I had read the Muslim Quran and the writings of Buddha having an understanding of their religions.

That was one of the interesting things about being in Afghanistan, all the different kinds of people from around the world. We were also joined by a guy from Florida whose family escaped from Cuba to the US. I was able to talk with him about friends of mine who had escaped from Cuba. He told me about his Aunt that just went back to Cuba where she grew up, saying it was once a beautiful city and now was a mess. And stated “that is communism… making everyone equal…. equally poor! I still don’t know how all the different countries worked together in Afghanistan, but I did see a sign in an office in Afghanistan, that clarified this a bit. It simply said

“War is business and Business is good”